This was an unusual assignment for me since I primarily do still photography but on the other hand it gave me a great opportunity to show off the fact that my camera takes wonderful video as well. I had a client ask me to create a video of her son to help him apply for football scholarships as he prepares to head off to college. The format was pretty simple. I'd shoot some video of him introducing himself and mentioning a few of his accomplishments. Then the rest of the video was clips of his performances on the football field. Shooting his introduction was probably the easiest part. Though I did request that we do a re-shoot since I got home and discovered that the field of focus wasn't quite where I wanted it to be. That turned out to a happy accident because he'd had so much more practice at saying his introduction that in the end we got a really polished clip of him in the can. 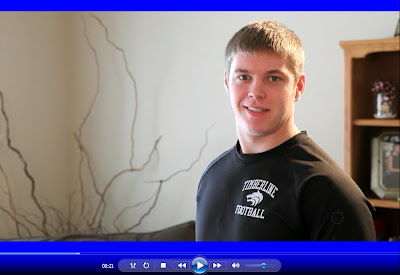 Then came the tedious work of isolating his selected plays from filmed football games and then rendering them as video clips. Then we all sat down for about four hours while he pointed out to me where he was as the start of each play. Then I highlighted him in the video so that prospective coaches could follow his action. Then I spent another week putting it all together. In the end, the video was four minutes and fifty seconds long. Here's a sample of the first minute or so.

This was a challenging project but I was pretty pleased by the way it turned out.
Posted by Unknown at 10:11 AM