Back In The Old Days Of Film

I've been photographing weddings for over twenty years and in the old days it used to be so much less work. Sure I was jumping over bushes to get ahead of the bride as she came out and crouching down to get the best shots of the ceremony while not obscuring the view of the audience but after I spent six to eight hours shooting the wedding and reception, I would just drop of the seven to twelve rolls of film and my work was pretty much done.

Now in the digital age there's so much more to do. For starters, I can shoot so many more pictures. My big chips hold lots of pictures and when one gets full I just put in the next chip. Shooting almost with abandon has a huge advantage over the film days and increases your chances of getting great pictures. It also improves your coverage of the wedding because along with getting all the pictures that the bride has included on her list, I like to make sure I get shots of everyone who has attended. One of the things I really enjoy about doing photography is freezing this moment in time and of recording the history everyone who participated in the wedding. The result is that I end up with hundreds of photographs to process myself in photoshop. No more just letting the lab develop and print the film. I sort through the hundreds of pictures, cropping them to make them look best, tweaking the color and exposure to bring out the best in the photos I've got. Sometimes I'll take the same shot and crop and work it different ways so that I'll end up with a couple pictures made out of the same shot.

So as you can see, the six to eight hours spent at the wedding is only the beginning. I will spend two to three times that much time making the finished product. Fortunately, the results are worth it.

Meanwhile, I've created something of a collage based mostly on my work from the easy old film days. There's a lot of fun memories attached all these old pictures and I'm really happy to share them. 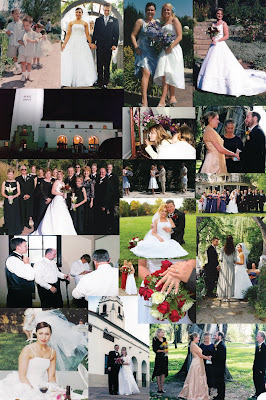