This time I'm going to talk about another fun thing that you can do with your camera: long exposures. The idea is to work in low light and then hold the shutter of your camera open for a longer time, thus capturing the light in a slower fashion. The results can be really interesting and you can get some results that you wouldn't see otherwise. For example you can make pictures of scenes that your own eyes can see but normally you wouldn't be able to capture with a camera. If your camera has a "bulb" setting, then you can hold the shutter open as long s you like. It's recommended that you use a tripod or something to stabilize the camera. I also used my infra red remote control. Otherwise you'll get camera shake or "ghosting." Then again, you might be going for "ghosting" but I'll go there another day. 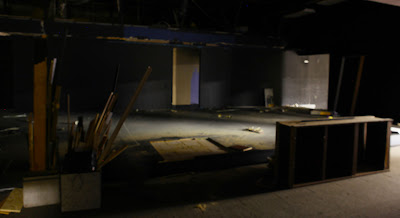 A community theater company that I work with is moving to a new location. So in the middle of the process I came in to take some pictures. With a lot of things in a transitional phase, this looked like an opportunity to capture some interesting images without turning on the lights. Here is the stage in the middle of being dismantled. The only light in the room is coming through the door to the lobby. I held the shutter open for a count of sixty seconds and really captured the mood of the room.

This picture is of the dressing room after all the makeup tables, costumes and dressing booths had been removed. The approach I used is that the room is pitch black except that I lit it using a tiny flash light with a single LED bulb that I laid on the floor. I held the shutter open for sixty seconds again. It really creates a different look from other techniques such as using a flash. 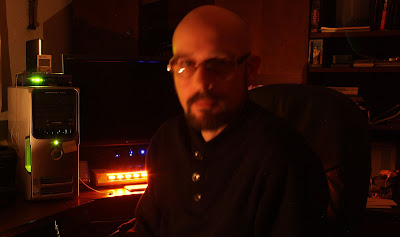 Long exposures don't always work for portrait shots. This is another sixty second exposure and it's really difficult to sit perfectly still for that length of time. So I got a little blurry. On the other hand, I really like the way the background came out and how all the tiny light sources back there showed up in the picture. The front lighting in this picture was a single small candle. Next time I try this, I might use more candles or a different small light source. It's a lot of fun to play with this technique and I'll be doing more in the future.
Posted by Unknown at 10:56 AM